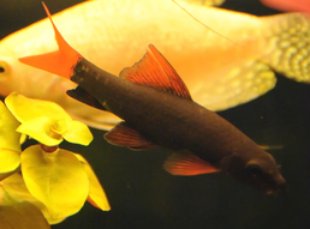 The red tail shark gets its name from its bright red tail. With its jet black body and contrasting red tail its bold appearance make it a popular choice among fish keepers. This fish originates from Thailand, but scientists believe it to be extinct or near in extinction in the wild.

In some ways this creature lives up to the stereo type that sharks are trouble, kept with the wrong fish its aggression can cause a problem. Young fish of this species tend to be less aggressive. These are also much more aggressive when kept with its own kind, they are also aggressive to other sharks. They should be kept with other robust fish such as Tiger Barbs.

These fish also have an unusual habit of jumping out of the aquarium, so open top aquariums are not recommended.

Due to their aggressive behaviour they should only keep one of these fish per aquarium. They can grow up to 5 inches; therefore the minimum aquarium size I would suggest is 100 litres.

Aim to keep water ph between 6.5 and 7 and try to keep the temperature between 22 and 26C.

Although not a lot of research has been done on natural environment in Thailand it is thought it would be heavily planted and with lots of wood, you should aim to replicate this in the aquarium.

This fish will appreciate a varied diet, should consist of flake food, algae wafers and live / frozen food.

This is a hard fish to breed and should not be attempted by beginners. Most of these are imported from Thailand and it is rare for them to breed within the aquarium. There are two issues which make this especially difficult to breed. Firstly, they are aggressive to their own kind, if you put two together they are more likely to kill each other then breed. Secondly, telling the males and females apart is very difficult.