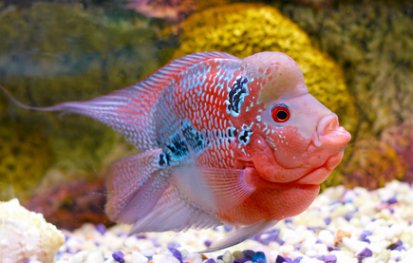 The Flowerhorn Cichlid is a result of breeding different types of cichlids together. They were created in Malaysia in the 1990s, but the combination of cichlid used to create this fish has been kept a secret. The secrecy has created a buzz about this fish, which partly explains its explosion in popularity. People have tried to guess it’s true origins. Some people claim its a result of a genetic experiment carried out in a lab. Many describe this fish as beautiful due to its bright colours. While other people hate the idea of a man made fish.

Personally I don't like its eyes, I feel there are so many cichlids already available in the shops. Plus part of the appeal of fish keeping is trying to understand the fish’s natural environment and the trying to recreate that in the aquarium. However I find the anger surrounding this fish is a little odd, Man has been selectively breeding fish for years. Just look at the Guppies for example, the Guppies we see in shops are far more colourful and with longer tails than the wild versions.

This fish is very aggressive and will even attack humans if they put their hands in the tank. Therefore tank mates are not advisable. Some people have successfully housed other large cichlids with them, but it is risky.

They are known for their large appetites and they will readily accept most food, they particularly like meaty foods such as worms and crab.

They grow to a maximum length of 12inches if you are going to need a fairly large tank. The exact size will depend on how many you want to keep, but I would suggest a minimum size of 200 litres

The fish should ideally be kept in with a pH of between 7 and 8 and the water temperature should be between 27 and 32C.

Try to provide the fish with lots of open space for swimming, but also create some caves or wood or rocks for it.

They love digging, so any aquarium plants are unlikely to last long.

Because they eat a lot they also produce a lot of waste and therefore a powerful filter will be needed for their aquarium.